This poor baby wasn't so lucky. In fact, it's the biggest victim of this mini heat wave: 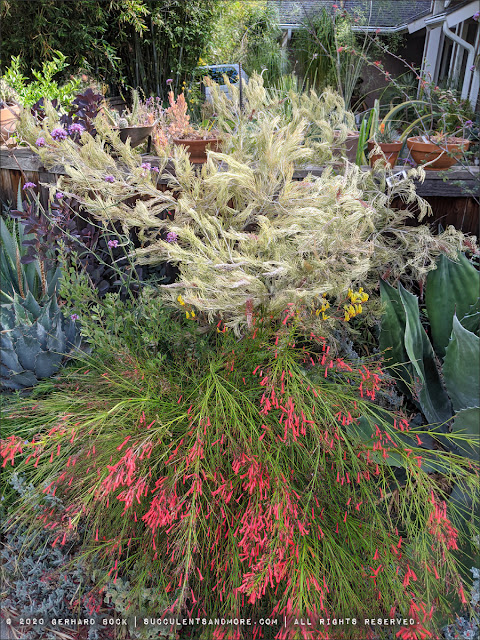 It's my prized Grevillea 'Kings Fire'. Last week, it was blooming merrily. Now it looks like a hair bleaching experiment gone horribly wrong: 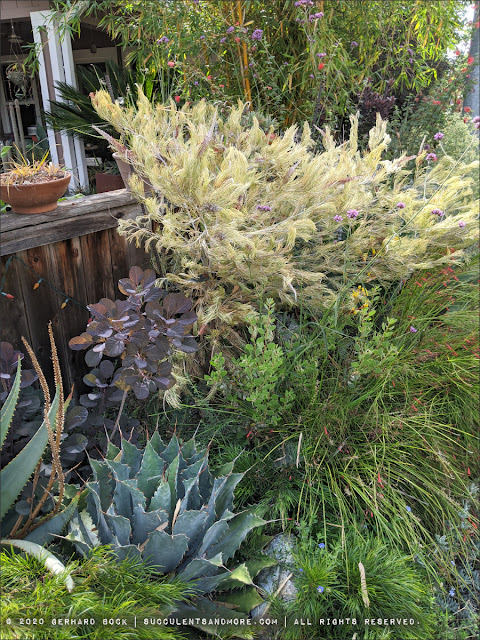 What happened? Was it the sudden jump in temperature? Was the soil just a bit too dry?

I honestly don't know. This grevillea has been in this spot for almost two years, and it thrived—until it didn't. Plants work in mysterious ways.

My first instinct was to cut it back hard, almost all the way to the ground, to encourage new growth from the base. Some grevillea species have a lignotuber, a swollen root crown with dormant buds from which new stems can sprout after a fire. Other species rely solely on seeds for reproduction. (Manzanitas, interestingly, fall in the same two groups.)

Since it's a bit hard to get to the base of our 'Kings Fire' to see if it has a lignotuber (and it's too hot outside anyway), I decided to look at its parentage for clues. According to the U.S. plant patent application, Grevillea 'Kings Fire' is a hybrid between Grevillea nivea (female parent) and Grevillea 'Crowning Glory' (male parent).

Is your head spinning yet?

After I'd determined all that, I happened to come across this article about Grevillea 'Scarlet Moon', the Australian name of 'Kings Fire', on the website of the Friends of Kings Park (the 1,000 park in Perth, West Australia where 'Kings Fire' and its siblings were hybridized). This article confirms my findings, i.e. that the parentage of 'Kings Fire' includes these species:
While I wasn't able to find a handy list of grevillea species that have a lignotuber, I stumbled across Flora of Australia, Volume 17A, Proteacea 2, Grevillea on Google Books. This 1981 reference indicates whether a grevillea species regenerates from seed or lignotuber:
Upshot: It doesn't look good. I also consulted with my buddy Troy McGregor, Queensland expat, plantsman extraordinaire and the mastermind behind Gondwana Flora, and he concurs that the probability of our 'Kings Fire' making a comeback is very low.

I won't do anything for now. Another mini heat wave is on the way, and the spring planting window has closed. But in the fall, I'll have to remove it unless something miraculous happens.

In the meantime, here are some photos of better days: 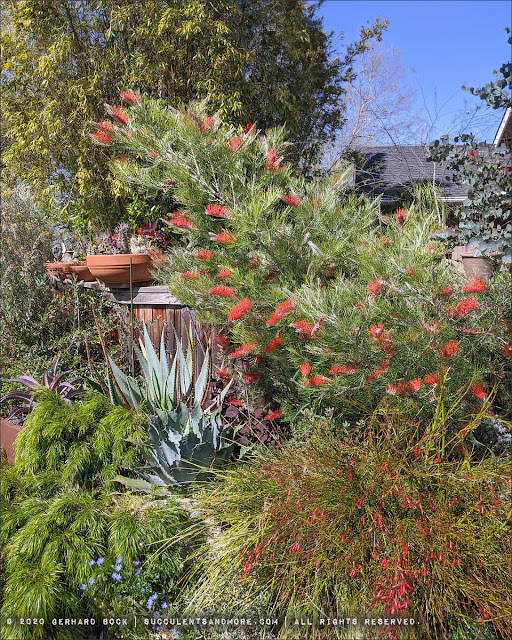 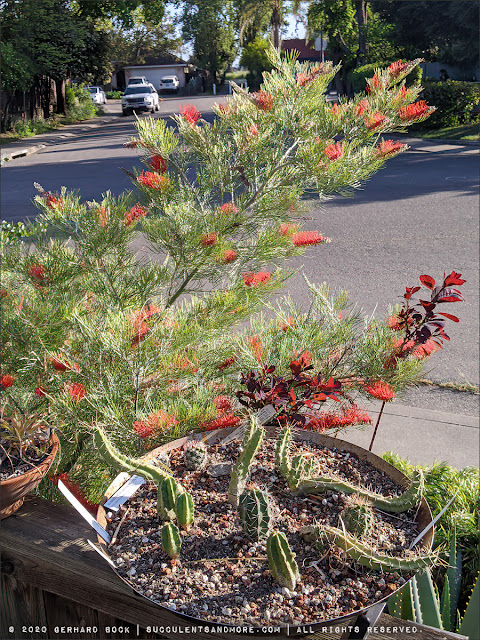 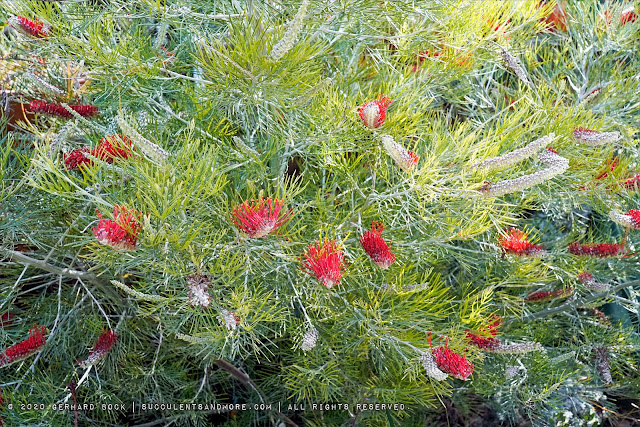 After the frantic bout of Googling that yielded the information for this post, I've come to one conclusion: I really need to get out more.

© Gerhard Bock, 2020. All rights reserved. No part of the materials available through www.succulentsandmore.com may be copied, photocopied, reproduced, translated or reduced to any electronic medium or machine-readable form, in whole or in part, without prior written consent of Gerhard Bock. Any other reproduction in any form without the permission of Gerhard Bock is prohibited. All materials contained on this site are protected by United States and international copyright law and may not be reproduced, distributed, transmitted, displayed, published or broadcast without the prior written permission of Gerhard Bock. If you are reading this post on a website other than www.succulentsandmore.com, please be advised that that site is using my content without my permission. Any unauthorized use will be reported.
Australian plants dead plants grevillea heat our garden proteaceae shrubs
Location: Davis, Kalifornien, USA