- January 22, 2020
My first Tucson stop on my recent Arizona trip was at Arid Adaptions Nursery at the foot of the Tucson Mountains. Owner Jeff Moore grows a wide variety of succulents on his 3-acre property—far more species than I'd realized. He sells them at farmers markets in the Tucson area, to private collectors, and to wholesalers in Tucson and Phoenix. (To clear up potential confusion, Arid Adaptation's Jeff Moore and Jeff Moore of Solana Succulents Nursery in north San Diego County are two different people and not related.)

As I was driving to Jeff's place, the sky was filled with the big puffy clouds I so love:

And here are we are, being greeted by Jeff's dogs: 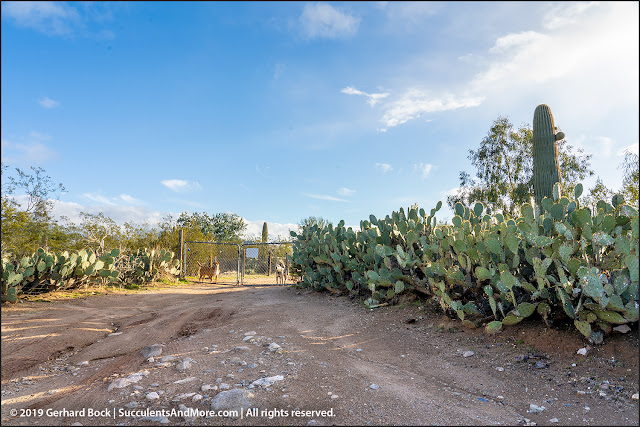 Jeff's nursery, Arid Adaptations, doesn't have regular hours and isn't set up for walk-in retail traffic. It's off the beaten path so chances are slim that customers would just stop by. But people interested in buying plants can set up an appointment, and Jeff will show them around. There's a lot to see: more than 200,000 individual plants! 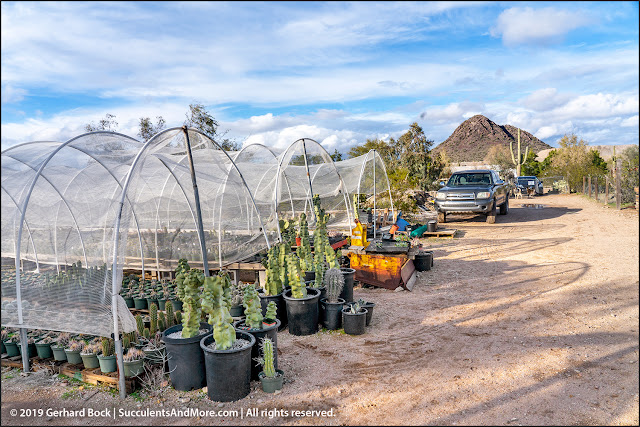 When Jeff bought the property in 2005, it was unimproved and had nothing but desert shrubs and a few eucalyptus trees on it. Through years of back-breaking labor, he transformed the lot into a thriving desert garden filled with trees, shrubs, cacti, agaves, aloes and all manner of heat-loving perennials.

And then there are the nursery structures—temporary hoop houses, permanent greenhouses, and outdoor growing benches—, all added by Jeff through persistent hard work. He's a one-man operation doing the work of two or three people. 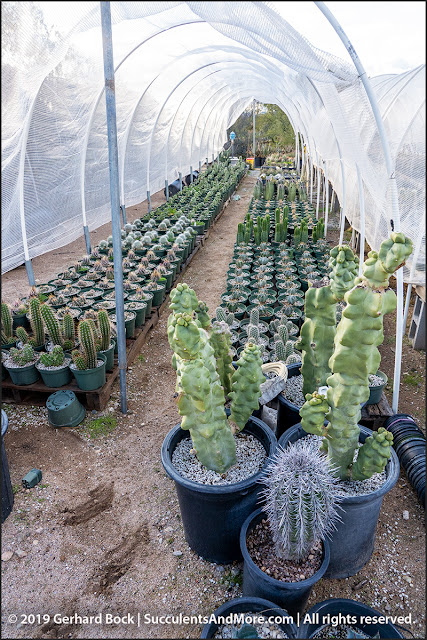 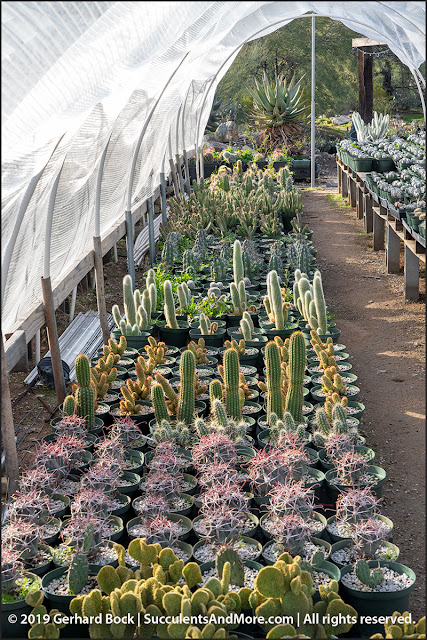 I had expected Jeff to grow a wide variety of New World succulents (especially cacti and agaves), and he does. But I was surprised by how much more he has, especially Old World plants: from aloes and euphorbias to South African bulbs and caudiciforms (adenias, adeniums, alluaudias, pachypodiums—you name it). 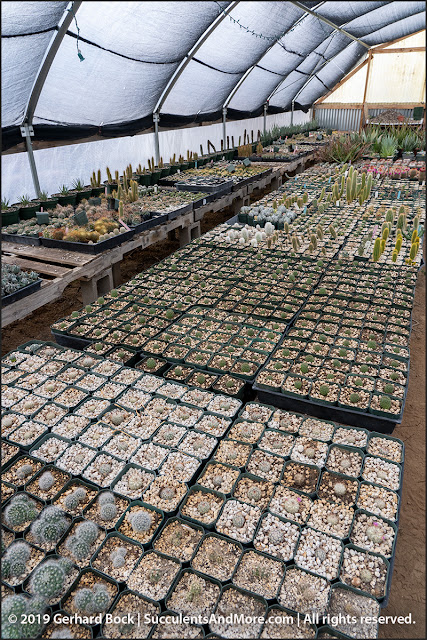 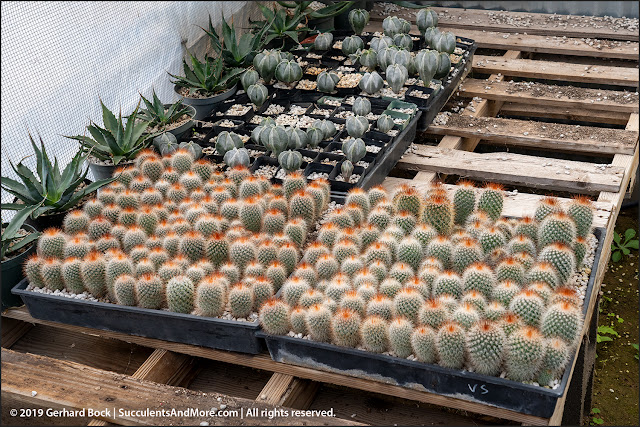 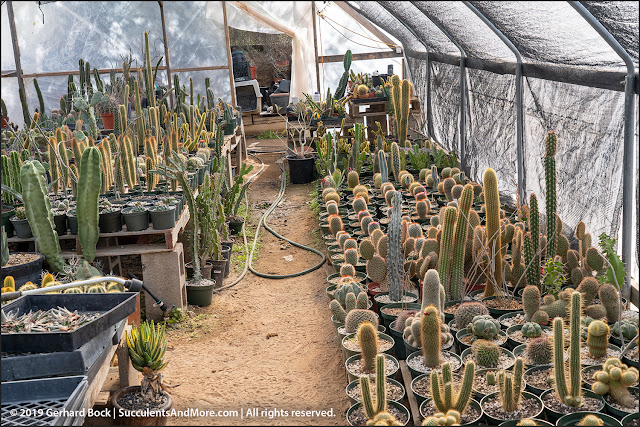 Here are some of the plants I hadn't expected to see:

Exploring the motherlode in the greenhouses was great fun. But seeing what Jeff has growing outside in the ground was just as interesting.


You can't walk far without coming across more production plants: 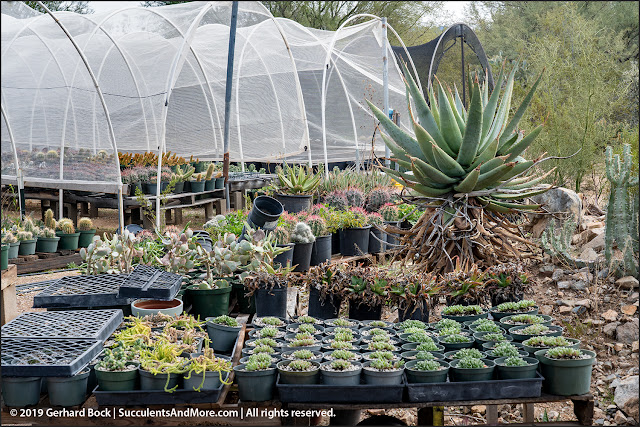 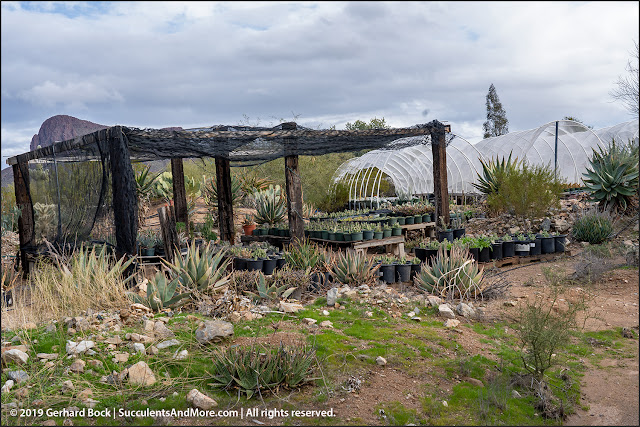 5-gallon cacti lined up like soldiers outside Jeff's house: 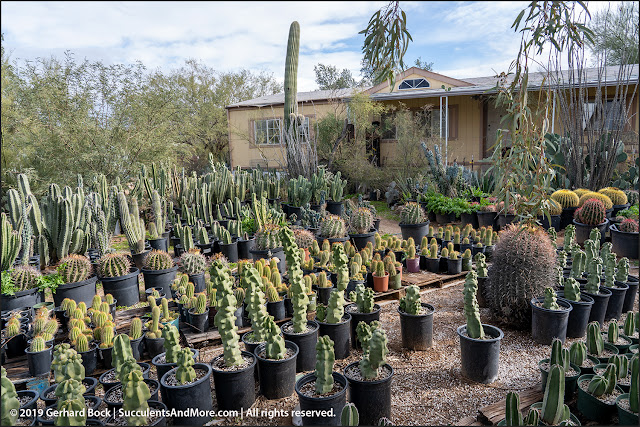 More plants on the other side the house: 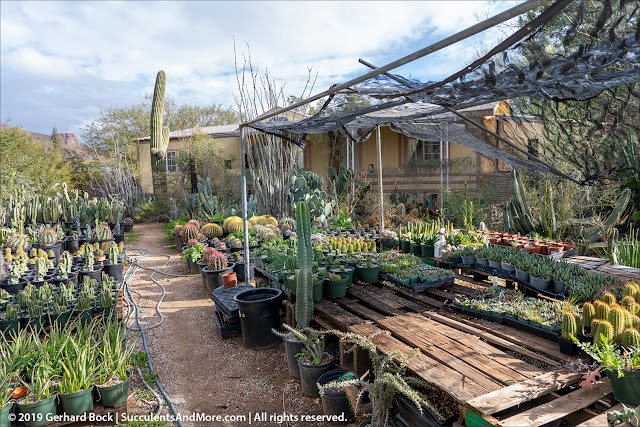 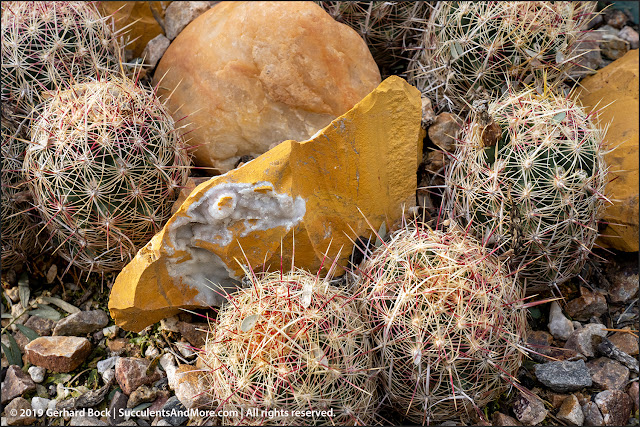 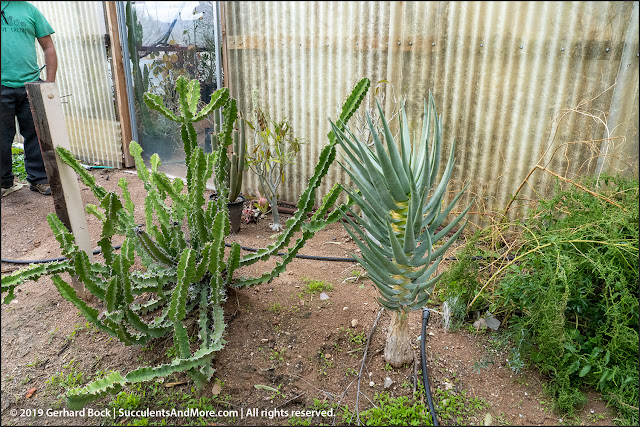 A closely related relative, Aloidendron ramosissimum, is growing nearby: 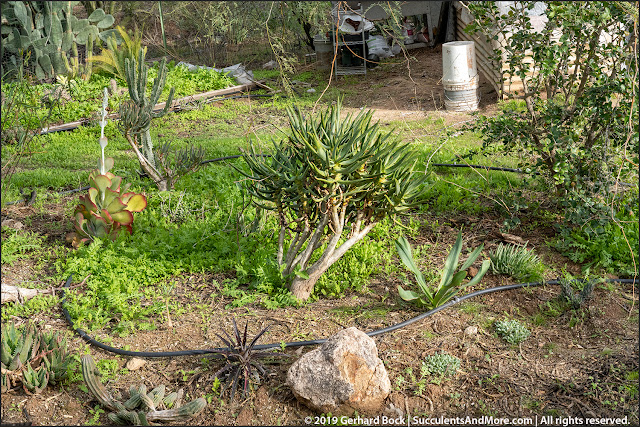 More aloe surprises 20 feet away, a pair of Aloe ortholopha, both of them pushing inflorescences (only one is visible in the photos below):


This greenhouse, the largest, contains a trove of treasures from Africa. They're Jeff's babies—few of them, if any, are for sale. 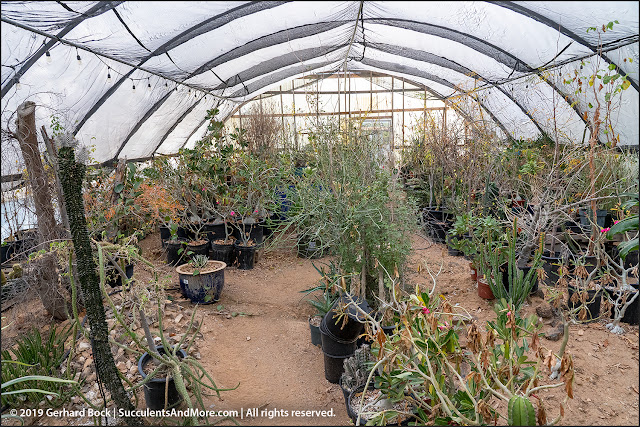 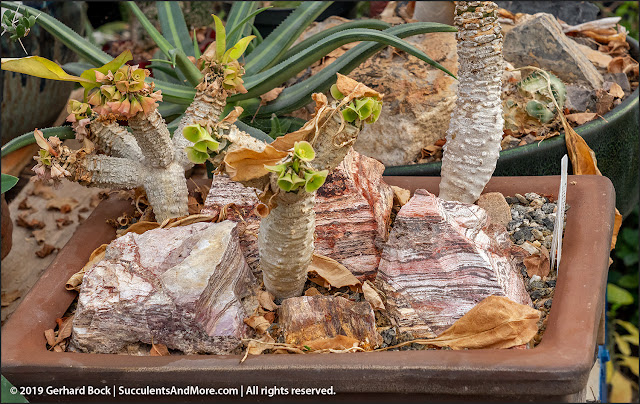 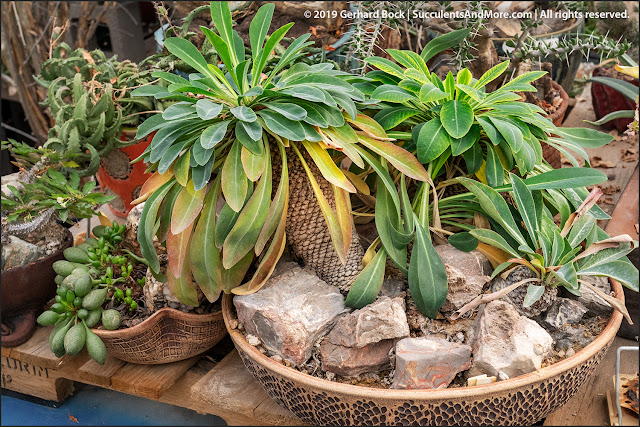 Jeff knows his stuff. In fact, he knows far more than somebody who grows succulents professionally should know (and that's a lot already). He's one of those folks who are able to store a seemingly unlimited amount of knowledge for immediate retrieval when needed—a quality I envy greatly. But then, he's not exactly a newbie. He's been growing plants in Tucson since 1992 and spent 10 years working as a horticulturist at the Arizona-Sonora Desert Museum. 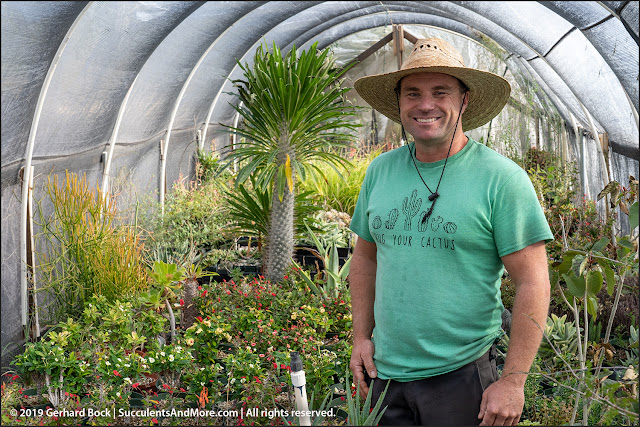 I mentioned earlier that Arid Adaptations is a one-man operation. That's true in the sense that there's only one human. But Jeff isn't alone. He has help:

By the time I loaded my purchases into the Prius and said goodbye to Jeff and the dogs, I realized to my amazement that I'd been there for nearly four hours. Time flies when you're hanging out with a fellow plant nerd!

If you're in the Tucson area and want to buy plants from Jeff, visit him at these farmers markets. If you're looking for a particular plant, contact him ahead of time, and he'll bring it for you.

The website for Arid Adaptations has a huge plant list. It's not entirely up to date, but it gives you an idea of what Jeff has got growing.


© Gerhard Bock, 2020. All rights reserved. No part of the materials available through www.succulentsandmore.com may be copied, photocopied, reproduced, translated or reduced to any electronic medium or machine-readable form, in whole or in part, without prior written consent of Gerhard Bock. Any other reproduction in any form without the permission of Gerhard Bock is prohibited. All materials contained on this site are protected by United States and international copyright law and may not be reproduced, distributed, transmitted, displayed, published or broadcast without the prior written permission of Gerhard Bock. If you are reading this post on a website other than www.succulentsandmore.com, please be advised that that site is using my content without my permission. Any unauthorized use will be reported.
Arizona cacti cactus nurseries plant purchases Tucson
Location: Tucson, AZ, USA