- February 03, 2019
I was very excited to find two boxes at the front door last week, especially since I didn't know they were coming: 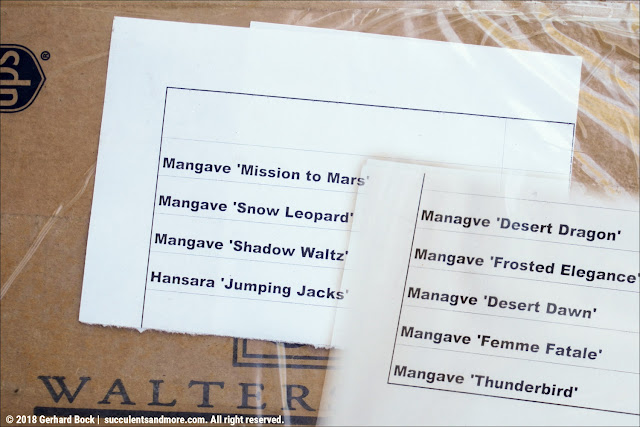 My mystery mangave benefactor was wondering if I'd like to trial the latest creations from Walters Gardens in Zeeland, Michigan where mangave wizard and plant genius at large Hans Hansen practices his hybridization magic. Except for one plant in the box, ×Mangave 'Mission to Mars', they were all new to me.

Opening boxes is a truly exciting thing. Maybe I should up my game and start producing unboxing videos like so many people on YouTube, but for now this is the best I can do:


The plants in box 1 came in plastic nursery containers, the ones in box 2 were in a tray and needed to be potted up.


Here are my new mangave babies in the backyard, waiting for the sun to come out: 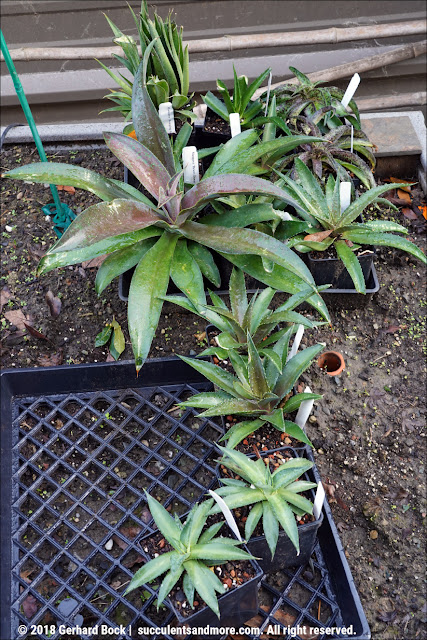 When plants are that small, it's often not apparent what their potential is. But look closer:

Below is more detailed information about my new plants. The photos are used with permission from Hans Hansen at Walters Gardens, © 2018. They show what mature specimens look like. It's easy to get excited, isn't it? 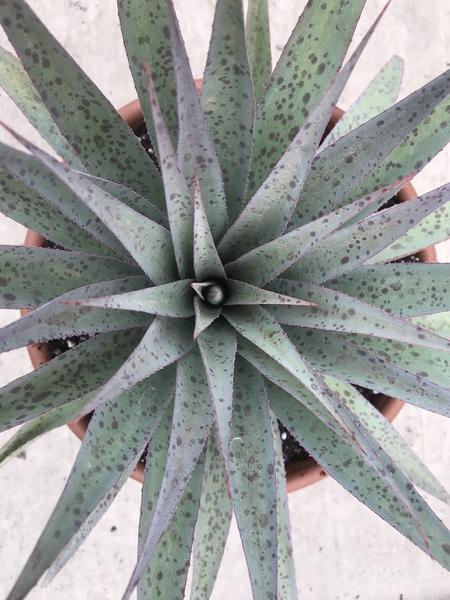 ×Hansara 'Jumping Jack's takes Hans Hansen's hybridization work one step further. ×Mangave is a bigeneric hybrid, combining two genera: Agave and Manfreda. ×Hansara, named after Hans, is the first-ever trigeneric hybrid in this succulent family, combining the genes of three closely related genera: Agave, Manfreda, and Polianthes (aka tuberose). Hans crossed Agave pablocarrilloi, Agave macroacantha, Manfreda maculosa, Polianthes tuberosa, and Polianthes howardii. Who knows how he did it—maybe he did go to Hogwarts School of Witchcraft and Wizardry after all? ×Mangave 'Desert Dawn' is a cross involving Agave macroacantha, Agave nizandensis, and a purple-spotted Manfreda. This is a smaller hybrid, growing to about 9" in height and 17" in width. The colors are bit more muted, just like dawn as opposed to sunrise. 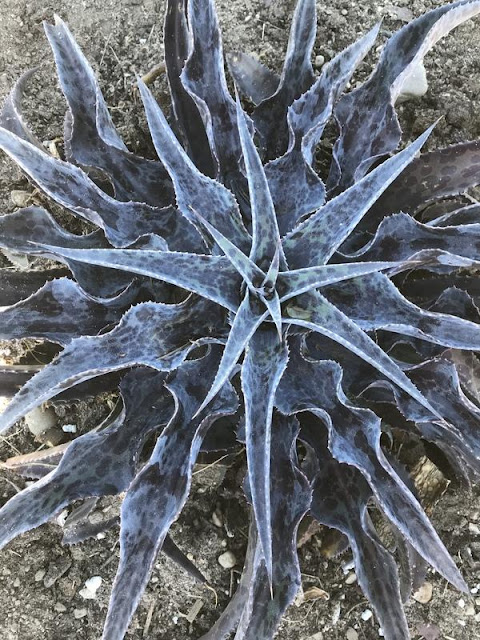 If ×Mangave 'Desert Dawn' isn't flashy enough for you, 'Desert Dragon' might be your thing. Plant Delights Nursery describes it as a "drug-induced hallucination of a giant spider." If you don't like spiders, don't worry; 'Desert Dragon' doesn't run or leap. At least not during the daytime.

'Desert Dragon' is a complex hybrid of Agave geminiflora, A. macroacantha, A. gypsophila ssp. pablocarrilloi, A. attenuata, and an unspecified Manfreda species. Mature size is 5" (H) ×19" (W), 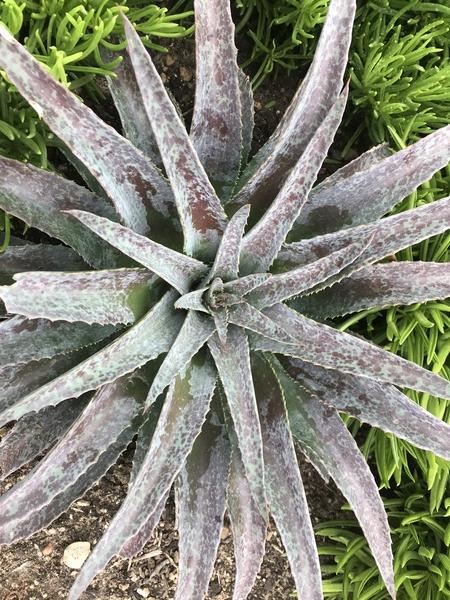 ×Mangave 'Femme Fatale' is all attitude but little bite. This hybrid of Agave macroacantha and a few Mexican Manfreda species has a layer of frosty white over purple spots against a blue background. Size is 9" (H) × 24" (W). 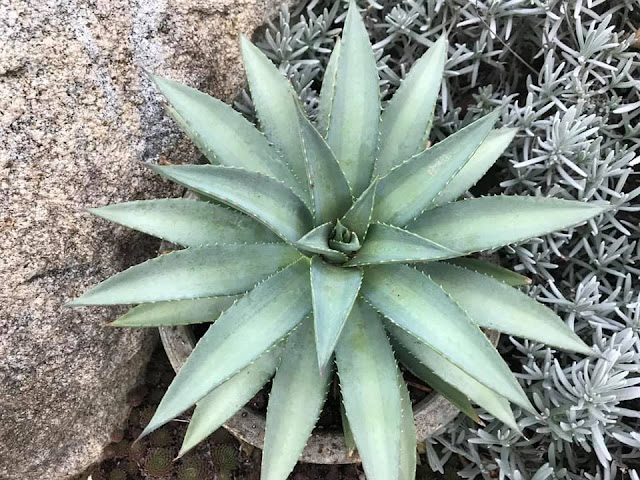 ×Mangave 'Frosted Elegance' is one of my favorites among Hans' 2019 mangave introductions. It has the same parentage as 'Desert Dawn' (Agave macroacantha, Agave nizandensis, and a purple-spotted Manfreda) but with a completely different coloration: silver-blue leaves with a lighter central stripe. It's on the smaller side, 6" (H) × 12" (W). 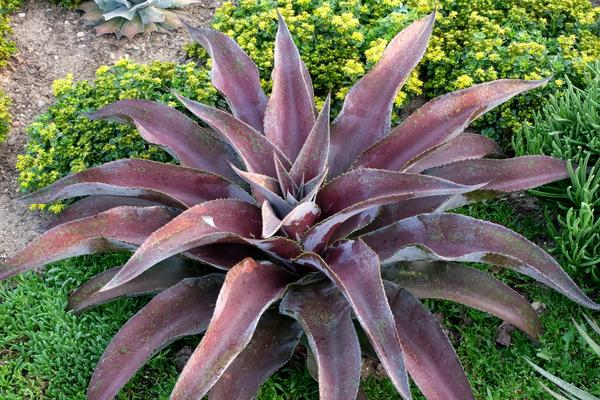 ×Mangave 'Mission to Mars' was actually released in 2018. It's one of the largest, most vigorous, and most vibrantly colored of Hans' recent introductions. It combines the genes of Agave shawii, Agave × pseudoferox and a few manfredas and grows to 2" (H) × 48" (W). Plant Delights speculates it might be hardy to zone 8a and possibly 7b. That would be great news, considering how many mangaves are zone 9 and above. 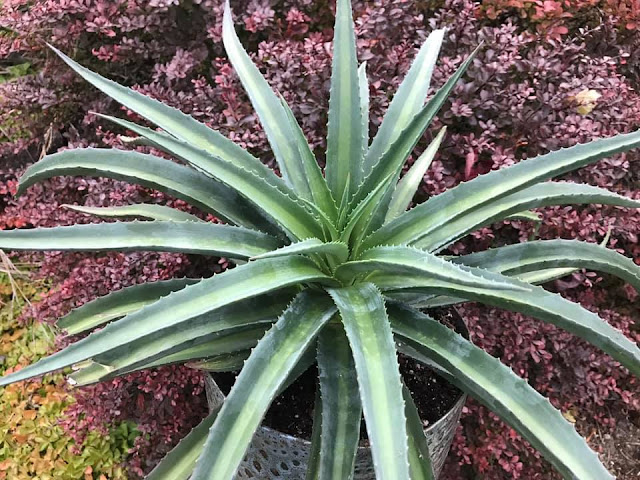 ×Mangave 'Shadow Waltz' combines the genes of Agave parryi, Agave nizandensis, and an unspecified Manfreda. To me, it resembles Agave nizandensis more than any other of Hans' nizandensis-based mangaves. In my eyes, the overall look is understated and refined. Plant Delights, never at a loss for words, compares it to a "spiny blue squid after rigor mortis sets in" (this is just one example why I love reading the Plant Delights catalog). Height is about 8", width maybe twice that. 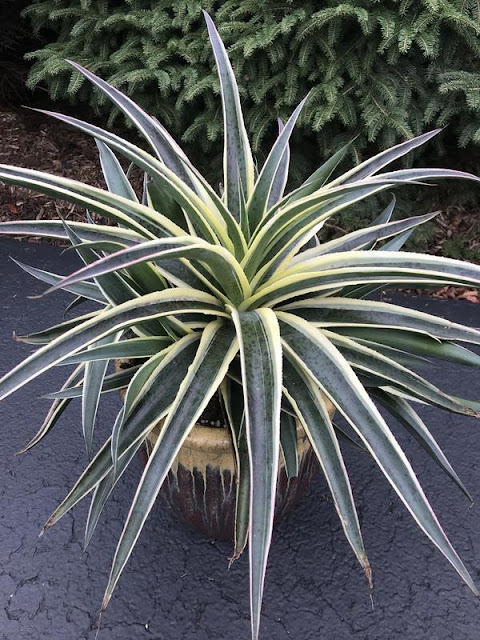 ×Mangave 'Snow Leopard' is another sport of ×Mangave 'Jaguar'. It has green leaves with purple spots and a white border. 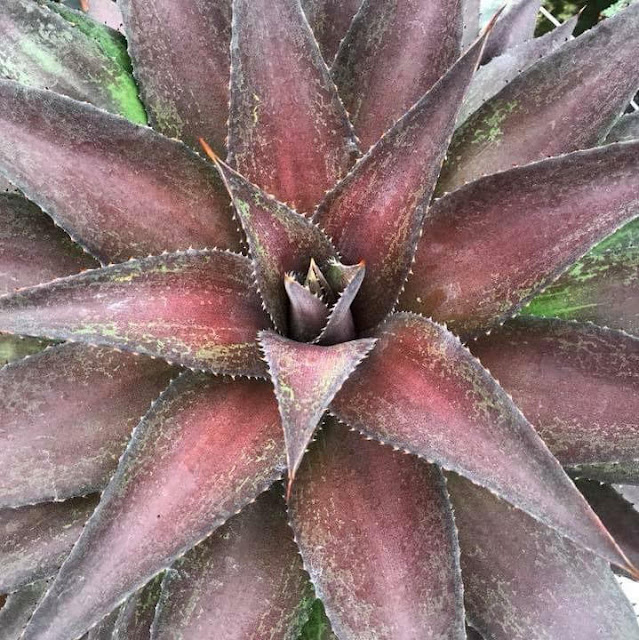 ×Mangave 'Thunderbird', a cross between Agave marmorata and two Manfreda species, is a true stunner. The spotting is so dense that the leaves appear to be a solid purplish red. Size is 8" (H) × 12" (W). It fits right in with the superficially similar but much larger 'Red Wing' that was released in 2018.

Walters Gardens is one of the largest wholesale growers of perennials in the country and you'll find their plants in nurseries all over the U.S. Having said that, I've heard that Walters Gardens' mangaves are hard to find in some part of the country; Plant Delights is the best mail-order source because they have most mangaves Hans has ever created.

And finally a word on pronunciation: I realize that one person's to-MAH-to is another person's to-MAY-to, but the -gave part in "mangave" is pronounced the same way as in "agave." In other words, it's man-GAH-vay, not MAN-gave. Imaging there's an accent on the "e" ("Mangavé") might make it easier to remember. That's what Walters Gardens did on a recent mangave poster that you can see on their Mad About Mangave Facebook page.

© Gerhard Bock, 2019. All rights reserved. No part of the materials available through www.succulentsandmore.com may be copied, photocopied, reproduced, translated or reduced to any electronic medium or machine-readable form, in whole or in part, without prior written consent of Gerhard Bock.  All materials contained on this site are protected by  United States and international copyright law and may not be reproduced, distributed, transmitted, displayed, published or broadcast without the prior written permission of Gerhard Bock.

If you are reading this post on a website other than www.succulentsandmore.com, please be advised that that site is using my content without my permission. Please report such unlawful use to me at gerhard[AT]succulentsandmore[DOT]com. Thank you!
agave Hans Hansen mangave new plants