- October 30, 2017
With its icy blue leaves, Aloe suprafoliata is a striking landscape plant, as seen here at UC Davis:

What attracts most people to this aloe species, however, is its juvenile form:

Its botanical name, suprafoliata, actually means “leaves stacked on top of each other.” The common name in Afrikaans is boekaalwyn, literally “book aloe.” It’s easy to see why: the stacked leaves of a juvenile plant resemble the pages of an open book. As the plant matures, the leaves swivel into the rosette you see in the first photo.

My own Aloe suprafoliata came from the UC Davis Botanical Conservatory. I can't remember when I bought it, but it must have been around 2013. It was tiny—in a 3-inch pot—but by August 2015 it had grown into a beautiful specimen: 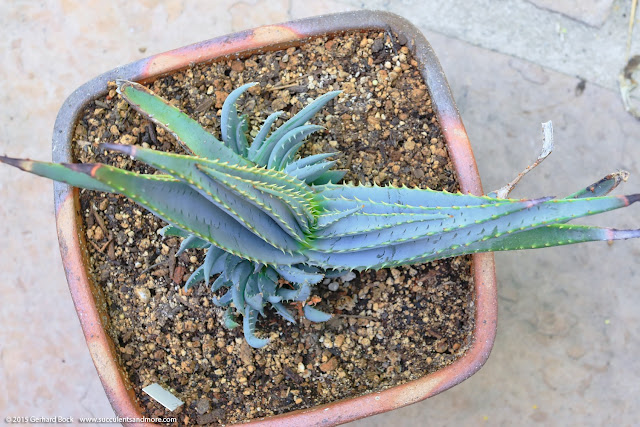 Fast forward 2+ years to October 2017. What you see now is a tangled mess: 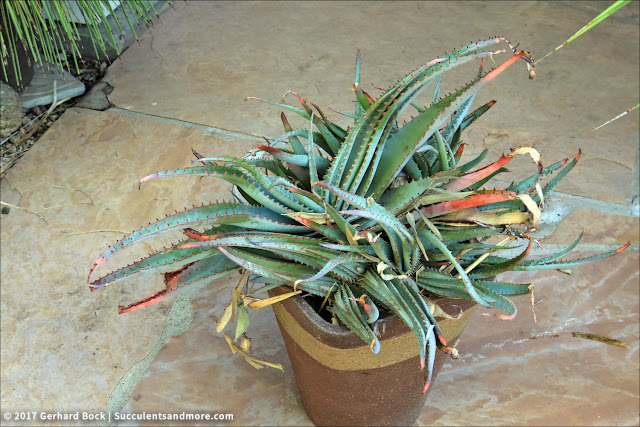 The leaf color has changed a little as well; it's more green now although that might be because it doesn't get full sun.

In its native habitat, Aloe suprafoliata is typically solitary. However, many forms in cultivation sucker, some (like mine) prodigiously. The reason is simple: Solitary plants are harder to propagate because you have to grow them from seed. Suckering forms, on the other hand, are the gift that keeps on giving, and it's easy to share offsets with others. As a result, suckering behavior that is uncommon in the wild eventually becomes the norm in cultivation. 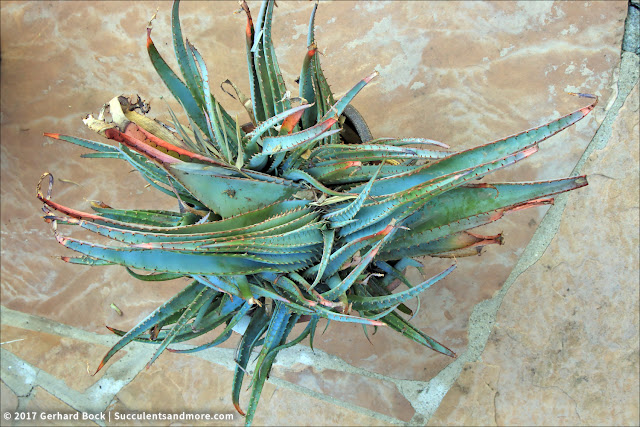 I've been meaning to take my Aloe suprafoliata clump apart for quite a while, and yesterday I finally did.

This is what I found when I took it out of the pot (photo on the left). I had actually expected a denser coil of roots at the bottom. After I shook off the soil and untangled the roots, I ended up with what you see on the right: 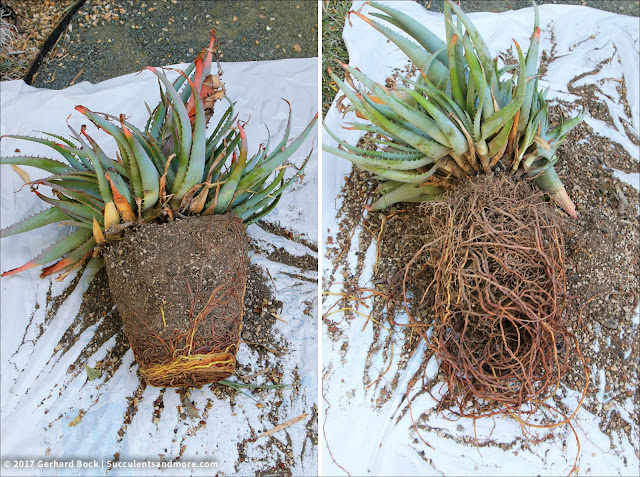 Separating the clump wasn't brain surgery. A little tugging and pulling was all it took. I ended up with the mother plant sporting an impressive mess of roots... 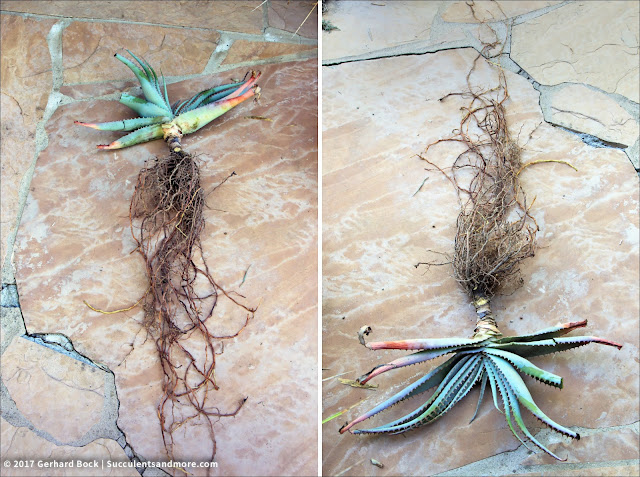 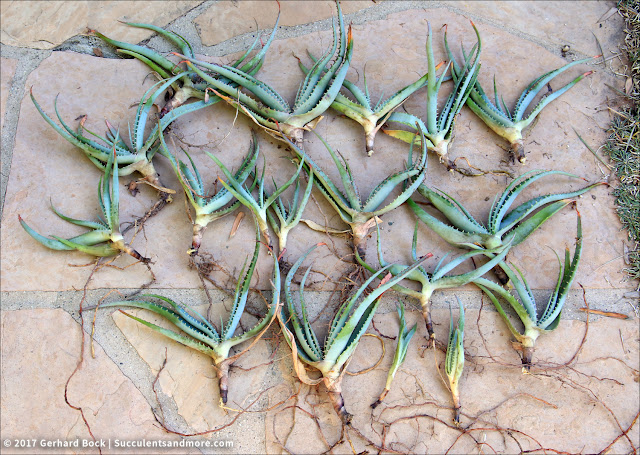 I potted up the five biggest offsets to give away (Dan and Brian, two are yours)... 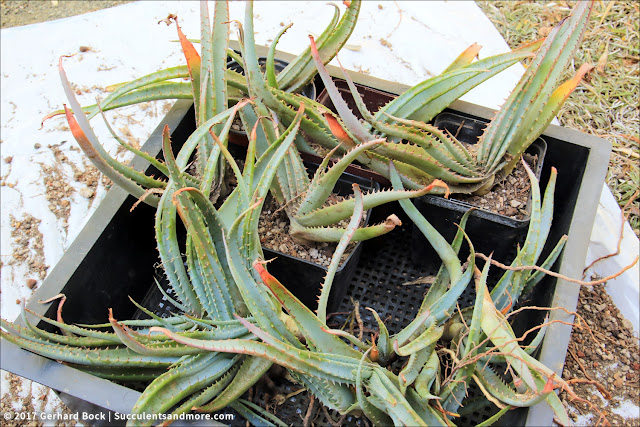 ...and stuck the smaller ones into an unused vegetable bed which has become a makeshift growing area. There they join an Agave colorata I've been stress-testing as well as three ×Mangave 'Macho Mocha' offsets waiting for a new home: 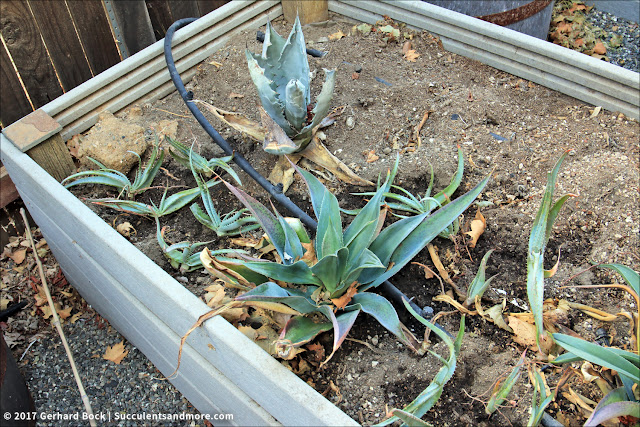 The biggest plant had its roots trimmed and will go back in a pot. I'm looking forward to having just one plant showing off that beautiful stacked leaf look. 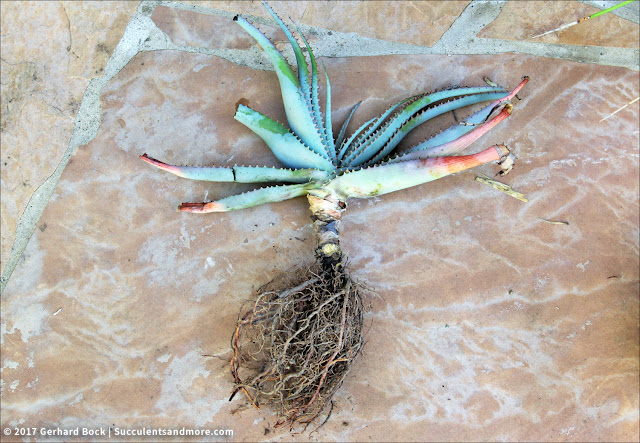 This task was a vivid reminder of how easy it is to propagate many succulents. If I were a plant seller, I'd be very happy to have turned 1 plant into 19!
aloe offsets repotting
Location: Davis, Kalifornien, USA