- June 07, 2017
Two years ago, in June 2015, I bought a dwarf jacaranda sold by Monrovia under the name 'Bonsai Blue' and I planted it in large concrete container on our back patio. Click here to read my original post. A lot of people have asked me how that jacaranda has fared. Time for an update!

'Bonsai Blue' is very much alive. In fact, it's blooming for the first time ever! I'm very excited because I wasn't sure it was ever going to flower, seeing how it receives only a few hours of direct sun. In full sun, I imagine it would be covered with flowers, just like a regular full-size Jacaranda mimosifolia. 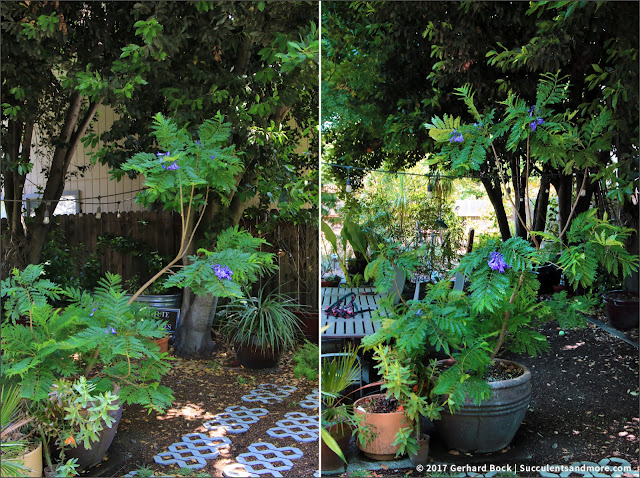 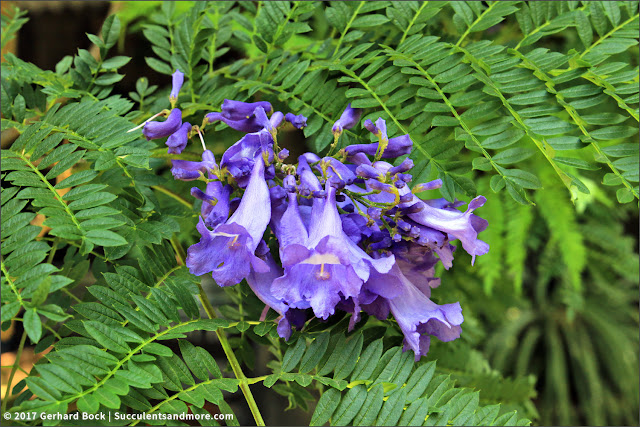 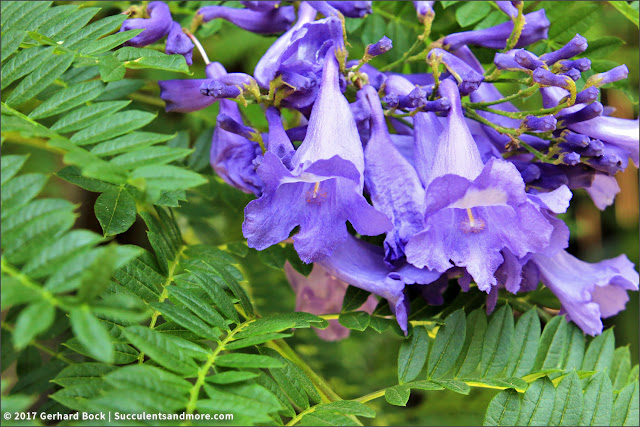 Even if it never flowered, I'd still love it for its leaves: 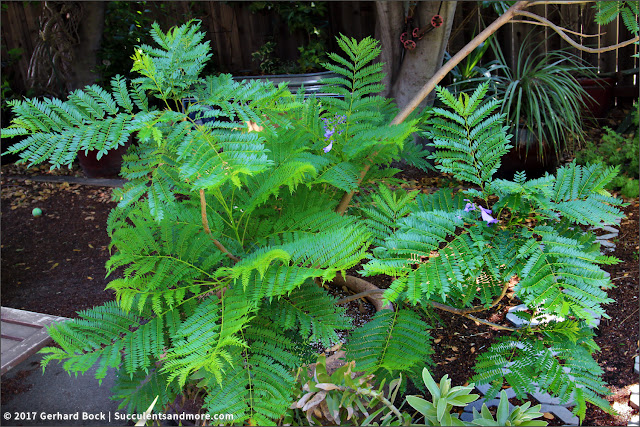 Bottomline: I'm happy with my 'Bonsai Blue' and will continue to give it good care.

But there are some lessons learned:

1. First and foremost, I should have been more proactive about pruning (yeah, what else is new?). As you can see in the first photo, there's one dominant leader that sticks out far above the rest of the branches. I shouldn't have let that happen. In fact, I'm tempted to remove the leader altogether so all that's left is the lower foliage. I think a bushier look be more appropriate than what I have now.

2. 'Bonsai Blue' (I imagine like all jacarandas) really doesn't like high winds in the winter. Last December, it looked like it would make it without loosing any leaves. Then came a series of wind storms that completely defoliated it. It took until March for new leaves to grow.

3. 'Bonsai Blue' grows quickly as soon as daytime temperatures stay in the 70s or above.

4. 'Bonsai Blue' is quite drought-tolerant, even in a pot with a limited amount of soil. Mine gets drip-irrigated once a week (plus some occasional gray water from the kitchen when I happen think of it), and it seems perfectly content with that regimen.

5. With regular pruning, I think I can keep it small enough so it doesn't look disproproportionate for its container.

Jacaranda ‘Bonsai Blue’ marketed by Monrovia is a true dwarf developed by Kiyoshi Sakai in Japan. It tops out at 6 ft. in height by 5 ft. in width, as compared to a height of 40+ ft. for a regular Jacaranda mimosifolia. Cold tolerance is the same at 25°F (zone 9b). The first 800 specimens sold by Monrovia were contract-grown in Israel by Hochberg Export Ornamental Plants. Availability is still limited, but hopefully it will be sold in more nurseries (and at a lower price) in the years to come.