In early October I spent a long weekend in one of my favorite places on earth: California’s Eastern Sierra. If you don’t quite know where that is, don’t feel bad. Many Californians aren’t sure either. 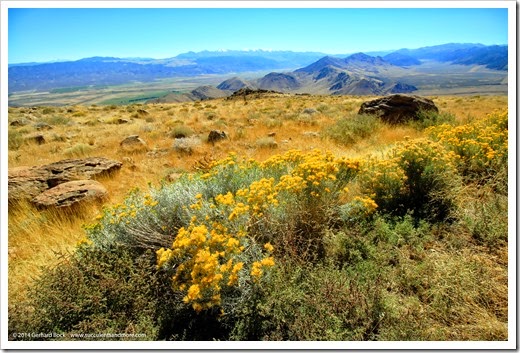 In the most basic terms, the Eastern Sierra is the area to the east of the Sierra Nevada, the mountain range that separates California’s Central Valley from the vast Basin and Range Province that stretches east to Colorado Plateau. While the western side of the Sierra Nevada has long reached iconic status thanks to Lake Tahoe, Yosemite National Park and Sequoia and Kings Canyon National Parks, the eastern side is less known. Ironically, the Eastern Sierra is much easier to explore. Highway 395 follows the Sierra Nevada from Reno, Nevada all the way down to Southern California. If you’re in a hurry and don’t have time to stop, you’ll still see majestic sights such as Mono Lake and some of the highest peaks in the Sierra, including Mount Whitney—at 14,505 feet (4,421 m) the highest summit in the contiguous United States—without ever leaving the highway.

But I suggest you take it slow and explore the myriad sights in this wonderland of desert, rock and light. There are mountain lakes as picturesque as they come, aspen groves climbing up steep slopes of granite, and vast expanses of sagebrush desert stretching all the way to the eastern horizon.

In spite of a smattering of small communities along Highway 395—the biggest being the winter sport mecca of Mammoth Lakes—this area is as sparsely populated as any in California. In every conceivable way, the Eastern Sierra is the antithesis of the population centers along the coast. Time progresses at a different pace here, and the people who live here like it that way.

On my recent trip I met up with several other photographers with whom I used to get together once or twice a year. Over time, we saw each other less and less, but we never lost touch. This fall was the 20th anniversary of our first gathering, and we decided to celebrate in the place where our friendship began: the Eastern Sierra. We timed our reunion so it would coincide with the peak of fall color. As is the case in most of the western mountain ranges, most of the color comes from the quaking aspen (Populus tremuloides). White aspen trunks and yellow leaves against the impossibly blue sky of the Sierra Nevada: that’s a sight you’ll never forget.

This first set of aspen photos below was taken at Conway Summit at 8,143 feet. Highway 395 goes right over Conway Summit, and the spur road to Virginia Lakes takes you to a small but beautiful aspen grove. 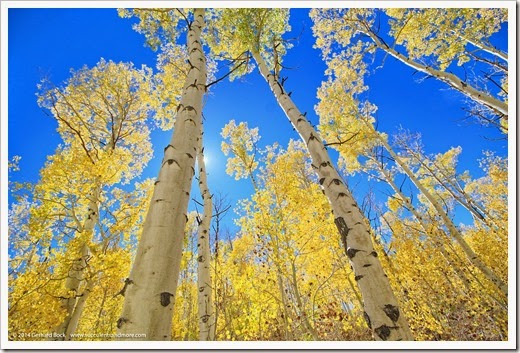 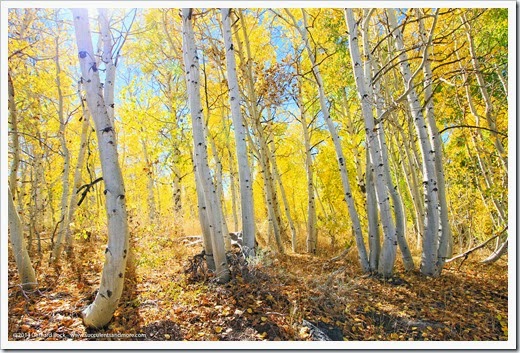 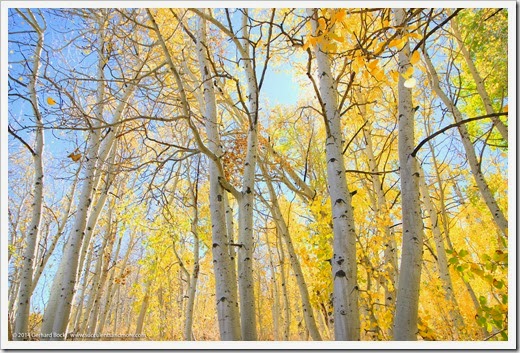 Aspens are not just beautiful, they are quite intriguing botanically. At first glance aspen groves look like any collection of trees growing in close proximity. However, DNA research has revealed that the trunks actually belong to the same living organism. In fact, all trunks in a grove share a single root structure.

The world’s largest, and one of its oldest, living organism is an aspen colony called Pando in South-Central Utah. It covers 106 acres, has 40,000 trunks, collectively weighs 13 million pounds, and its root system is thought to be 80,000 years old. Try to wrap your mind around these stats!

While the aspen trees at Conway Summit are beautiful individually, for overall impact the lakes to the west of the town of Bishop are to beat. Here is North Lake, ringed by aspens whose fall color ranges from yellow to rusty orange.

That takes your breath away, doesn’t it? Not only figuratively but also literally, considering that North Lake is at an elevation of 9,350 feet (2,805 m). It’s paradise not only for leaf peepers, but also for fisherman, as was evident the morning we were there. 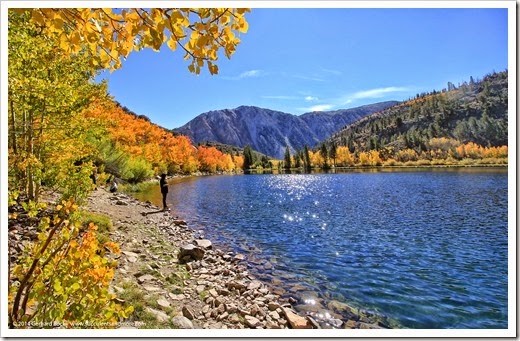 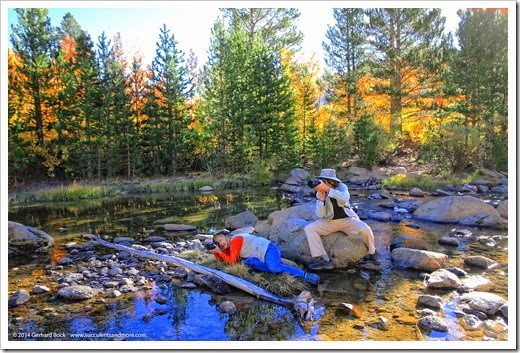 The things photographers will do to get a good picture!

The aspens at North Lake are truly inspiring. I took dozens of photos trying to capture the contrast between the grayish trunks, the yellow leaves, and the granite rock faces behind them. 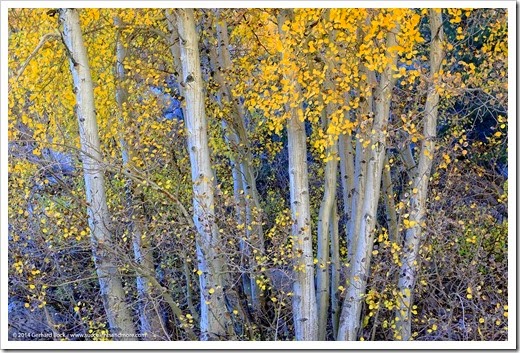 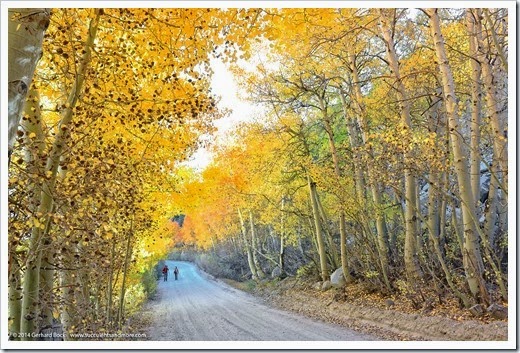 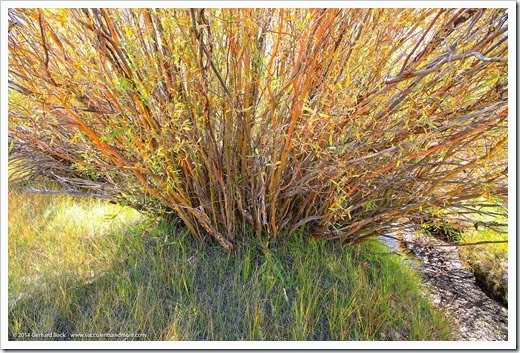 This willow was pretty photogenic too! 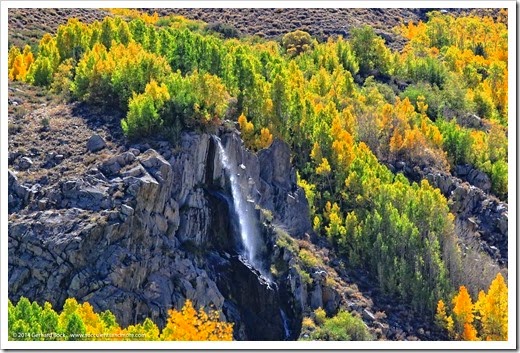 Waterfall spotted from the road 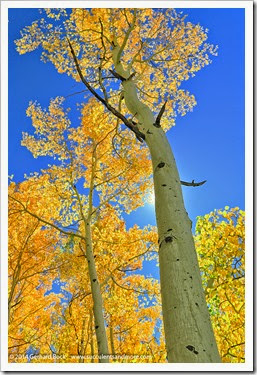 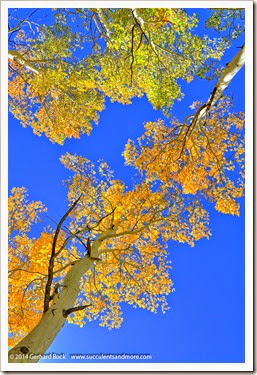 Iconic sights in the Eastern Sierra 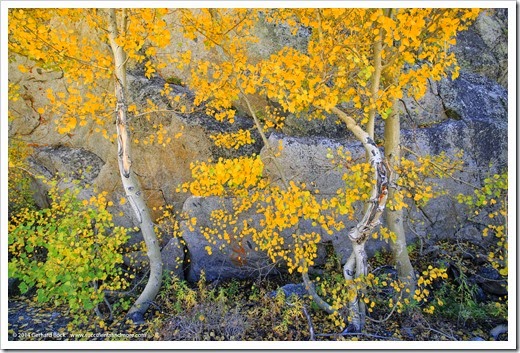 Wherever you look there’s something beautiful to see 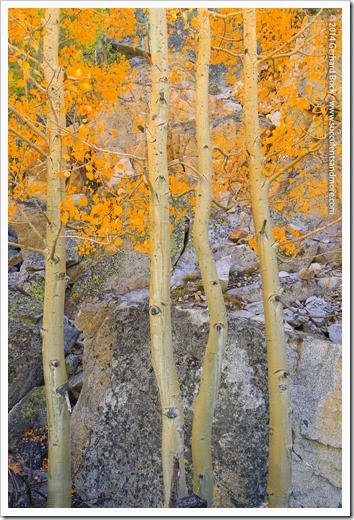 While the high country is studded with lakes, water is scarce on the valley floor. 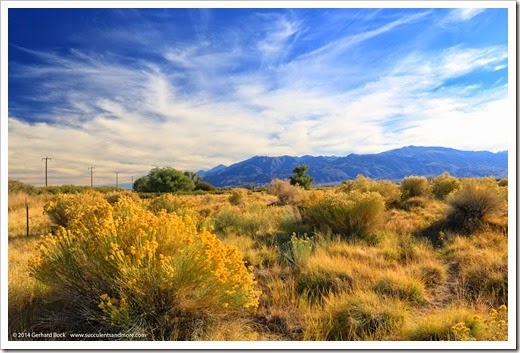 The sight of a flowing stream in the sagebrush desert is quite incongruous. It’s also emblematic of the role water plays in the history and politics of California, especially the eternal tug of war behind the cities and the rural hinterland. The Owens Rivers shown in the photo below has featured prominently in the California Water Wars. Many books have been written about water in California; this 2012 article from the New York Times is a good introduction to the subject. Also check out Chinatown, Roman Polanski’s 1974 movie with Jack Nicholson and Faye Dunaway. 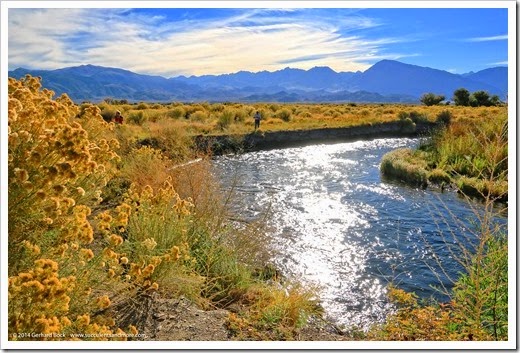 The final location I want to show you in this post is the most spectacular—not just in California, but anywhere. Mono Lake is as surreal as it gets. Located east of Yosemite National Park—in fact right where the Tioga Pass Road (SR 120) runs into Highway 395—this alkaline lake is significantly more salty than the Pacific Ocean. This limits aquatic life to algae and brine shrimp, which in turn sustain migratory and nesting birds.

Mono Lake’s most striking feature are its alien-looking tufa towers—limestone formations created over time through a chemical reaction between the calcium in water from underground springs and the carbonates in the lake water. When you see a photo of tufa towers, you know exactly where it was taken. Mono Lake is such an otherworldly place that even people who never take photos whip out their phone and take a picture or two. 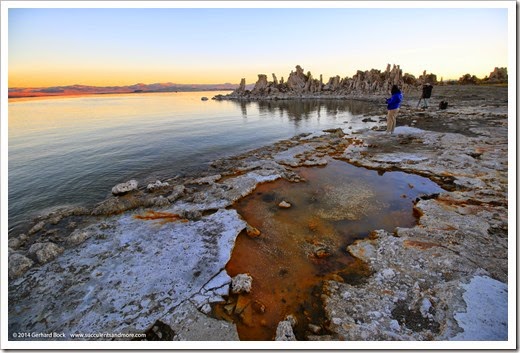 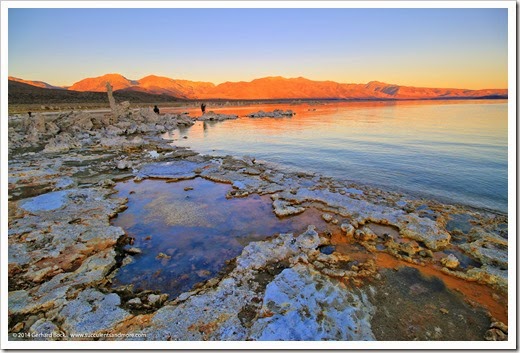 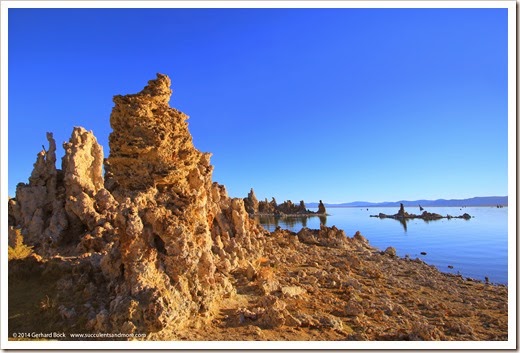 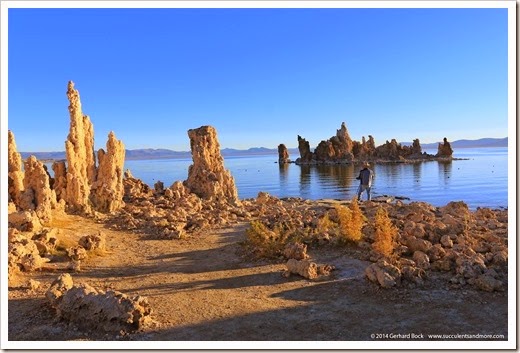 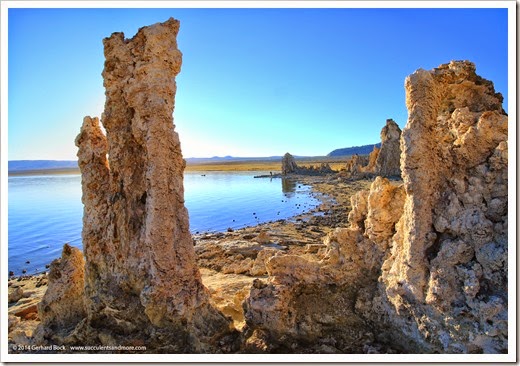 Mono Lake has had a troubled history since the Los Angeles Department of Water and Power started to divert water from the Mono Basin in 1941. I won’t go into the long fight to restore the flows of water to Mono Lake but the web site of the Mono Lake Committee headquartered in Lee Vining on the western edge of the lake provides a good summary.

Landscape photographers discovered the Eastern Sierra a long time ago but to many mainstream tourists it’s still terra incognita. That’s fine by me; too many people spoil the party anyway.