A few weeks ago I wrote about the plants I’m overwintering inside. I forgot to mention a few, and one of them is among the strangest succulents of all. Commonly called “string of pearls,” its botanical name is Senecio rowleyanus. It’s member of the giant genus Senecio which contains 1,250 species, not just succulents, but also common weeds (like groundsels), wildflowers (like ragworts) and even shrubs and small trees (such as Senecio cristobalensis).

“String of pearls” is a very good name, although to me its looks more like a string of peas. The spheres are modified leaves, and they grow on trailing stems that seem to go on forever. The leaves are round to reduce the surface area exposed to the hot sun and dry air, thus minimizing the loss of precious water through evaporation.

In its natural habitat in southwestern Africa, the stems trail on the ground, rooting where they touch and forming dense mats. In cultivation, Senecio rowleyanus is almost always grown as a hanging plant to display the trailing stems and curious leaves to maximum effect. 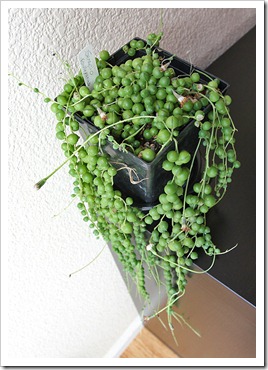 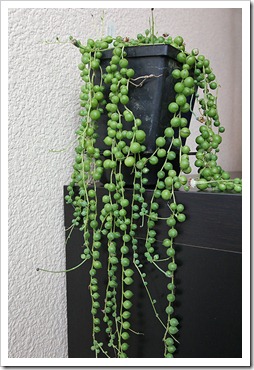 Senecio rowleyanus is not fussy as long as it gets bright light and is kept on the dry side (it’s a succulent, after all). It’s not very hardy (zone 9), and even though it would probably survive outside in our winter, it does much better if it’s brought inside for the coldest months of the year.

My plant was quite small when I bought it last summer—the longest stems barely reached the bottom of the pot. As you can see, it’s done quite a bit of growing since then. 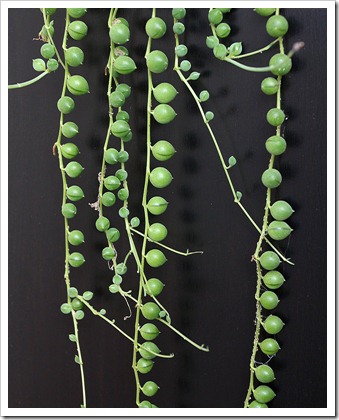 I never get tired looking at the weird leaves. They look so fake, I’ve seen people touch them to make sure they’re real.

Propagation is a cinch: Simply cut or pinch off a length (maybe 4 inches), place it on top of well-draining soil mix and lightly cover it. Soon new roots will develop from the axils where the leaves are attached to the stem.

Do you see the dark green horizontal stripes in the leaves? These “windows” are transparent tissue that allows light to enter and hit photosynthetic cells inside the leaf. This is an added way for the plant to generate energy since the surface area available for “conventional” photosynthesis is limited because of the spherical leaf shape.

My goal is to transplant my specimen into a larger pot this spring and then add a number of cuttings so I’ll end up with a dense mass of trailing stems like this. And if I ever find a head planter, I’ll recreate this look as an homage to Debra Lee Baldwin, the goddess of all things succulent.

P.S. Some people call the small white flowers that appear at this time of year “beautiful.” I think they look weedy and spoil the look of the plant, at least temporarily. My specimen just bloomed and there were too many flowers to remove so I didn’t bother. They have a slightly sweet, cinnamony scent, almost like the “holiday potpourri” air freshener popular at Christmas time.